Heidi and Rolland Baker went to Mozambique in 1995 with a vision to plant a church and reach forgotten orphans. Today they are reaching thousands with the gospel, overseeing hundreds of churches and witnessing a miraculous outpouring of the Holy Spirit. 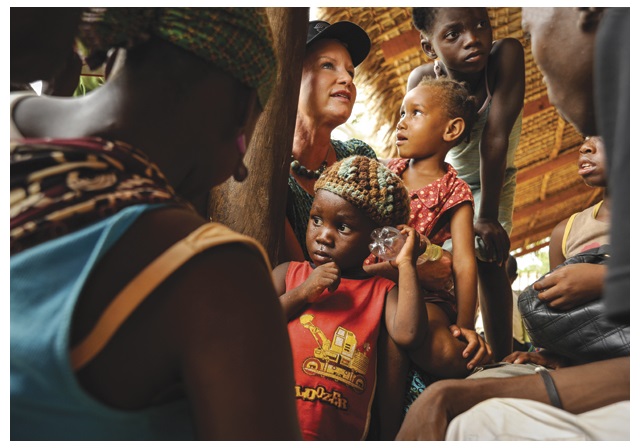 The deaf hear, the lame walk, the blind see, the dead are raised to life, and tens of thousands have surrendered their lives to Christ–all of this is happening in the southeast African country of Mozambique, a nation suffering the squalor of extreme poverty in the aftermath of a prolonged civil war.
When missionaries Heidi and Rolland Baker of California arrived in Mozambique in 1995, they struggled to begin a church and a dilapidated orphanage housing 80 children, a center previously run by communist leaders. Today the Bakers’ Iris Ministries (IM) cares for thousands of orphans and is approaching the point of having a church in every single village in large areas of central Mozambique and southern Malawi.
In June 2001, the Bakers counted more than 1,800 total churches under IM–a large number considering they had only 200 churches in June 2000. By August 2001, a report came in from Malawi that more than 1,200 churches were started since the Bakers’ first and only conference in that small African country in August 2000.
The Bakers call their indigenous churches Partners in Harvest, and define a church as a group of more than 50, usually including as many as can hear a preacher’s voice without a sound system–around 300. IM has planted four Bible colleges in the nation to equip new pastors, who study for three-month terms once a year for four years.
With revival flames from Mozambique leaping into the countries of South Africa, Malawi, Tanzania, Zambia and Botswana, the demand for Portuguese Bibles, pastors, teachers and Bible colleges to train pastors has dramatically increased.
“Intense hunger for God is sweeping this country,” Rolland Baker says. “Pastors are calling us from other countries–Ghana, Kenya, Tanzania, Zimbabwe–wanting the same revival. Our leading evangelists cannot wait to get to Angola and Sudan. The harvest is ready. The wedding feast is prepared, and the poor must be called in.”
The Holy Spirit is indeed calling in the poor, who walk in the bush of Africa for days and even weeks–often without food or shoes–to attend conferences hosted by IM. As many as 10,000 people at one time crowd around makeshift platforms to hear and receive the gospel, as thousands repent and are healed, delivered of demons and brought closer to Jesus.
But this move of God is sovereign and often independent of scheduled meetings and conferences. One afternoon, as the Bakers and a few friends began to leave a restaurant, the cooks and waiters saw them leaving and came out of the kitchen, crying out: “Don’t leave! Don’t pass us by!” Falling to their knees on the restaurant floor, each one received Christ.
“In America, we pull and try to get people into a church,” Rolland says. “All we have to do in Mozambique is land a plane, and in 10 minutes we can start a church.”
Incredibly, it’s really just that easy. When the Bakers have occasion to land their small Cessna 206 plane inside a remote area, people gather around them and listen to the gospel. Without hesitation many receive Christ, and in every instance there are several who express the desire to go to Bible school. They beg for their own church, more preaching, Bibles and prayer.
AT ANY COST
Although the reports of harvest and revival are thrilling, they haven’t been without a cost to this husband and wife duo. Rolland and Heidi have been scorned by skeptical medical and government officials, thrown out of their own building, shot at five times and close to death more than once from floods, violence and disease.
After the Bakers arrived in Maputo, Mozambique, in 1995, they were delighted when the government gave them the city’s dilapidated orphanage. However, when the number of children grew from 80 to 320, the previous government leaders resented the Bakers’ success and put a price on Heidi’s head. They also banned the singing of Christian songs in the orphanage, prayer and the “unauthorized distribution of food and clothing.”
The experiences were so horrific that the Bakers declared themselves “burned-out missionaries” and were ready to quit–until the Holy Spirit touched them in a special way during a meeting at the Toronto Airport Christian Fellowship in 1997.
“I loved God, but I hated ministry,” Heidi confesses. “I didn’t like getting shot at and kicked around. Rolland was dying of malaria, and I went to Toronto. The second time I heard Randy [Clark] preach, I got stuck to the floor for seven days and nights. Electric shock volts were going through my body. It was scary and wonderful.”
Heidi saw visions of hundreds of churches, and Jesus walking on the garbage dump in Mozambique. God spoke to her that they were to begin a Bible school to train pastors.
After returning to Mozambique, however, the couple was forced to leave the children behind, and, heartbroken, they went into the city of Maputo to stay with friends. In the Bakers’ absence, the children began to sing at the top of their voices–for which they were beaten and forbidden to ever sing to God again.
Disheartened without Mama Heidi and Papa Rolland, the children began to leave the orphanage and walked 20 miles to find the Bakers. The orphans not only found Heidi and Rolland–they also found a miracle. A small saucepan of rice and chili was multiplied, feeding not only the Baker family, but also all of the 80 orphans, who were the first to follow the Bakers to town.
Remembering the word the Holy Spirit had spoken about training pastors, the Bakers found 12 men and gave one of the orphanage buildings to them for their Bible school. 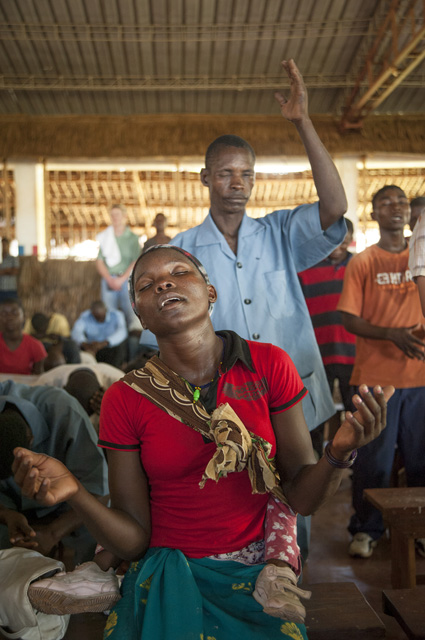 “Everything that happened to me when Randy prayed for me in Toronto happened to them when I prayed for them in Mozambique,” Heidi recalls. “Now these men are the top leaders among pastors in Mozambique, and God [has] used them to do everything that’s in the Book [the Bible].”
However, not everyone in Mozambique was excited about the new missionaries doing everything that’s “in the Book.” Heidi’s street preaching angered Mozambican policemen at first, and they arrested her. The policemen thought that if the Bakers fed the street children, more children would be encouraged to run away.
“We’re not against you; we’re your friends,” Heidi told the city police. “We want to help child prostitutes. Bring them to our center anytime. It doesn’t matter; we’ll take them.”
One day the policemen responded to Heidi’s offer and brought 10 prostitutes ages 9-12 to the Zimpeto Children’s Center near Maputo. All 10 girls received Christ, were filled with the Holy Spirit and spoke in other tongues. They fell to their knees, sobbing and crying.
These girls are only 10 of thousands who have been taken in by this charismatic couple, and despite ongoing hardships and resistance, Rolland and Heidi continue to go about their work of picking up the starving, the dying and the orphaned from the garbage dump and streets because God told them, “I am picking them up, blowing away the squalor and dust, washing them in My blood, shining them with My fiery glory, filling them with My life, and sending them into all of Africa.”
Rolland, 53, grew up in China with his missionary parents, James and Marjorie Baker. Rolland is the grandson of the late H.A. Baker, author of Visions Beyond the Veil, an account of visions of heaven and hell seen two generations ago by children in his orphanage in southwestern China.
Heidi, 42, received Christ while working at an American Indian reservation at age 16. Shortly after her conversion, she had a vision in which the Lord told her she would minister in Africa, Asia and England.
The two met in 1980 in a small charismatic church in California, where they recognized they were united in their call to see revival among the poor. They married six months later, then traveled as missionary evangelists to Indonesia, Hong Kong, England and Mozambique.
Randy Clark, the man God used to start the Toronto revival in 1994 and who prayed over Heidi, compares this resilient couple to great missionaries of the past. “It’s like God took a George Müeller and Mother Teresa and told them to get married and then sent them out to the world’s poorest people,” Clark says.
In the winter of 2000, when the world watched with horror as Mozambique was submerged in deadly floodwaters, the Bakers sought God for direction on what they should do during the crisis. Little did they know the miracles that were about to be birthed out of these tragic events.
Heidi recalls, “I opened up to Matthew, and it said, ‘Feed the 5,000’; and to Luke, it said, ‘Feed the 5,000’; and John, ‘Feed the 5,000.’ I said: ‘Oh, God, is that all that’s in the Book? Feed the 5,000?'”
Knowing the exorbitant cost of feeding 5,000 flood victims every day, the Bakers went to the bank to find they had only $27 to work with.
“That was our lunch,” Heidi says. “So I called the Marxist government people, and I said: ‘Hi there, we just want you to know, we’ll take that camp [of flood refugees]. We’ll take 5,000 people a day, and we’ll start tomorrow.'”
The Bakers told their bewildered staff to go find bakeries in Maputo and order a total of 5,000 loaves of bread per day until the flood crisis was over. The next day, the money came to pay the bakeries, and every day the Bakers and their IM staff believed God to supply bread for 5,000.
Four times during those months, the money did not come in. But taking God at His word, the Bakers told their staff to load up the trucks and send out the bread they had–and each time, God multiplied it so that there was enough to feed everyone. 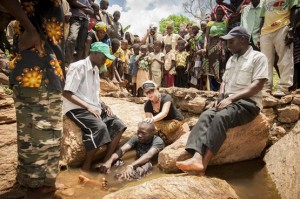