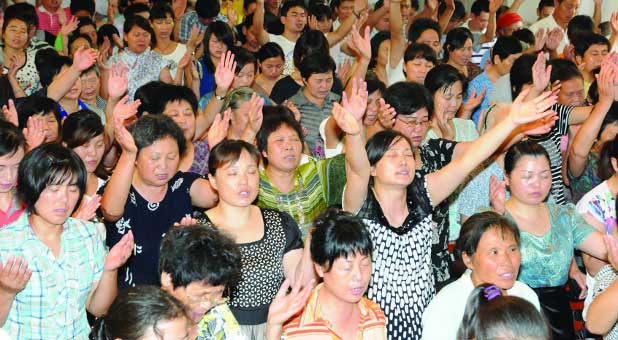 In China, some 30,000 people a day are turning to Christ. Is this historic move of the Holy Spirit changing how the communist state treats Christians?

Dorothy Sun was attending a house church meeting in China last spring when four police officers started to pound on the door and shout for those inside to open up. Upon entering, they immediately demanded to see everyone’s identification cards. A female church leader quickly stepped forward and rebuffed the order—telling the policemen that everyone in the room lived in the building, had forgotten their IDs and were gathered to celebrate the nation’s Labor Day. After back-and-forth shouting with the leader over her dubious answer, the officers left.

Such exchanges are what many outside China’s borders believe is the norm for the Chinese church—and what Sun says is part of the ongoing secreted crackdown on Christians that Chinese authorities have practiced for decades. A native of China, Sun has personally felt the sting of government persecution, having spent six years in prison and 14 more working in a forced-labor factory as penalties for her faith. She has since become a U.S. citizen but returns to China annually with her husband, Freddie, who also has been jailed there for his faith, to work with house churches that refuse to register with the government. These indigenous believers, the Suns say, are spiritually alive and spreading the gospel despite the government’s opposition.

By all accounts, the Holy Spirit is moving in unprecedented ways in the world’s most populous nation. But not everyone agrees that this move comes in the face of government opposition. In fact, American missionaries who have lived in China for decades believe the Chinese government has drastically shifted in recent years, which has ushered in an era of greater religious freedom today that’s contributed to this remarkable revival.

Amazing Changes
Dennis Balcombe, a charismatic missionary from California who moved to Hong Kong in the late 1960s, says the situation for Christians in mainland China is more nuanced than many observers describe it.

“It’s not like there isn’t persecution, but it’s isolated,” says Balcombe, who knows the Suns and doesn’t discount the reality of their experiences. He too emphatically believes the nation he now considers his home to be spiritually alive.

“I’m very optimistic about what I see in China,” he says. Balcombe has visited modern coastal cities with churches numbering in the hundreds of thousands, and even rural congregations in which thousands gather to worship throughout the week. He describes one church that even maintains a 24-hour prayer center with volunteers from 400 congregations and has a seminary of 500 students.

Balcombe was banned from visiting the country’s mainland for seven years—something he attributed to his refusal to pay a bribe—but today he sees a new openness toward the church on the part of many government officials, who recognize that Christians have played a major role in China’s economic rise.

Balcombe calls stories of ongoing persecution “outdated” and no longer truly descriptive of Christianity in China. In many parts of the country, he adds, house churches are even encouraged. Because thousands of such churches exist in many cities, government officials are hard-pressed to register them all.

However, the government does restrict churches—in three primary ways: (1) size (megachurches are frowned upon); (2) political matters (these must be avoided); (3) orthodoxy (orthodox Christianity must be preached). Pentecostal and charismatic beliefs are now considered orthodox. While Balcombe can’t imagine democratic government coming to China soon, he says his goal isn’t to change government policies anyway, but to lead as many people to Christ as possible.

Now that he is no longer involved in the day-to-day pastoral duties of the Hong Kong church he founded, Revival Christian Church, Balcombe travels  regularly to the mainland. After recent visits, he says he’s been “amazed” by the changes taking place across the country and the explosive growth of the church.

In particular, he’s encouraged to see spiritual revival spreading to the government-approved Three Self Patriotic Movement (TSPM) churches as well. Balcombe says this is prompting a historic union between TSPM and house church leaders—the latter who were often persecuted by their “government-sanctioned” brothers and sisters.

Balcombe recently accepted an invitation from a TSPM pastor to preach in his church, and the missionary conducted a daylong teaching session during which nearly everyone was filled with the Spirit, spoke in tongues and prophesied.

“I’ve never seen this in America,” he says. “I saw hungry people, people getting healed, and heard of stories of revival. It’s like the book of Acts. Living here we have a completely different perspective than Westerners have.”

Carpenter (who asked Charisma not to use his real name) prefers as a pastor to maintain a low profile with the government. However, he says this is due to his American heritage (officials don’t like Westerners mixing with Chinese citizens in religious services) and to ever-shifting government policies about social or religious conduct across the nation.

“What is OK today might get you in trouble tomorrow,” he explains. “China is all about keeping social unrest off its shores. Every decision is driven by a desire to keep the peace. What appears to be religious intolerance is motivated most of the time by religious fanatics making trouble.”

Regarding interference or persecution by the authorities, Carpenter says government spies have attended his church meetings and he has been the subject of clandestine eavesdropping. But he says these realities don’t represent constant oppression. He insists that as long as a house church remains under 100 people, it doesn’t encounter trouble with the government, generally. If it does, the conflict usually is rooted in complaints from neighbors, particularly in urban areas when services get too loud, he says.

The Suns have had a different experience, however, in their involvement with China’s house churches. Dorothy Sun serves as the co-director of the China division of Christian Aid Mission (CAM), a Virginia agency that trains missionaries in 122 nations and operates 146 Bible schools throughout every province of China and Tibet. She says the Chinese government’s persecution of believers is just as commonplace today but has become masked to the outside world by the nation’s economic growth.

“A lot of people are deceived by the five-story buildings and modern hotels they see pictures of,” says Dorothy, referring to the architectural makeover of Beijing done in advance of the 2008 Summer Olympics. “They never know about the suffering churches and the oppression people suffer from the government.”

Practicing in the Open
Though opinions differ on the degree of that suffering and the extent of the church’s growth—Balcombe places the number of current believers between 80 million and 110 million—the spiritual fruit of this shift is undeniable.

Carpenter has noticed that as churches grow beyond the small-group size, they also seek to be more grounded in biblical doctrine, which opens a door to opportunities for deeper ministry. “They say, ‘Will you talk about the Holy Spirit?’ and I talk about the Spirit for three days,” he says. “I will even get into the baptism of the Holy Spirit. I’ll ask and everyone in the room wants it, whether it’s 15 or 150.”

Balcombe says another trend is for believers to leave houses in favor of meeting in church buildings, or to rent hotel rooms and other places in which to gather. In any large city on any Sunday, he says, hundreds of thousands of these congregations meet in hotels, restaurants and other public places. In areas such as Wenzhou, a large port city in the southeast, congregations build their own buildings that can seat 1,000 or more. He notes: “This is great for evangelism, as they attract many [people].”

Due to this new openness, Balcombe advises against using the term underground church, saying it has negative connotations of a government trying to wipe out Christianity.

“Many still use the term house church in China, but it needs to be defined. To a Chinese Christian it is any church not under the Three-Self Patriotic Association,” he says. “Some meet in buildings with a cross, but as they are not TSPM they are considered house churches. We might use other terms, like nonregistered, local or independent churches.”

Regardless of the term used to describe the vehicle in which the Holy Spirit is moving, the central focus for locals and missionaries alike is how God continues to bring hope to a people once oppressed.

“It is revival,” Dorothy Sun says. “In 1949 the communists took over and there were less than 40 million Christians. Going through all kinds of persecution, we doubled it to more than 80 million. Like the Bible says, when a kernel [of wheat] dies, later you will see a harvest. This is what is happening.”

It’s also a harvest especially noteworthy for American believers, who, as Balcombe and the Suns point out, have much to learn from their Chinese counterparts. Dorothy Sun stresses that revival can only come to the U.S. if people turn back to God: “If you think you are strong and rich, there will be no miracles around you.”

Ken Walker  is a writer based in Huntington, W.Va., and co-author of  Winning the Food Fight, which releases this month. {jcomments on}