Author says Americans should be ‘on faces praying’

The author of a new book, Mideast Beast: The Scriptural Case for an Islamic Antichrist,” Joel Richardson says there are things about Iran that few Americans, including American Christians, know.

“First, the present regime is on the verge of being toppled. The Iranian people are extremely unhappy with their leadership. There is the very real chance that the present mullocracy could fall in a very short time,” said Joel Richardson, who also has written “The Islamic AntiChrist.”

“Recent and credible intelligence reports argue that the looming fall of the Assad regime in Syria will be a devastating blow to the ayatollah’s regime,” he said.

“Second, the nation of Iran is presently experiencing the greatest Christian revival in the world. In my opinion, more American Christians need to be on their faces praying for the Iranian people rather than openly calling for war. Of course, there are no easy answers here, but among those calling for war, I see very few who are beginning in the place of prayer,” Richardson told WND.

He recently was a guest on a show broadcast via satellite into Iran hosted by Pastor Hormoz Shariat, Ph.D., who is known as “the Billy Graham of Iran.” His television show on the Shabakeh7, or Network 7, channel is so popular that Shariat is said to be the third most recognizable figure in Iran after Ayatollah Khamanei and President Mahmoud Ahmadinejad.

The name Shabekah7 is a reference to the fact that there are six official television stations in Iran. Although Shabekah7 is an outside station beamed in via satellite, it is estimated to be watched far more than the official networks.

Although satellite dishes are technically illegal in Iran, more than 60 percent of the homes have one.

“It’s a bit of a joke actually,” said one of the station’s producers. “The government confiscates the dishes, and then turns right around and sells them back to the people. In fact, satellite dishes are so abundant in Iran, that they are jokingly referred to as the unofficial national flower of Iran.” 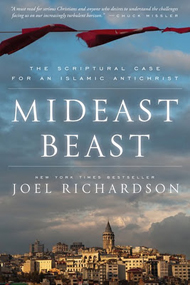 Richardson, who was initially scheduled to travel to Tehran this summer to present a paper at the eighth annual International Conference of Mahdism Doctrine, had an opportunity to appear on Shabekah7 after the conference was canceled.

“Although I was truly looking forward to traveling to Iran and speaking to a few hundred Iranian religious scholars … I had the chance to speak directly to between 3 and 6 million Iranians. I was able to speak directly to the people, sharing my testimony, God’s love for the Iranian people and most importantly the gospel,” said Richardson. “It was an amazing blessing and truly one of the most wonderful opportunities of my life. This would have been illegal if I was actually in the country. The present regime is terrified of the transformative power of the Gospel among the Iranians.”

With tensions between Iran, the United States and Israel running extremely high over Iran’s uranium enrichment and weapons programs, some Americans have been openly calling for the U.S. or Israel to attack Iran. Richardson, however, cautions that such an attack could have drastic negative ramifications.

Violence and crime are on the rise as Iran has the highest drug use per capita in the world. Out of desperation, people are turning to drugs and prostitution to escape the pain of their seemingly hopeless situation. With the prevalence of crime and addiction, there is a growing public opinion that something is fundamentally wrong with Islam and people are seeking change in multiple ways: politically, spiritually and culturally. In this unique season of the spiritual revolution Iran Alive Ministries has the opportunity to greatly impact the next generation of Iranians who are desperately searching for the transformation of their country.

Though some skeptics claim that this goal is far too optimistic and unrealistic, Iran Alive workers are not deterred.

“Despite tremendous resistance, the church in Iran right now is growing at a rate of 20 percent per year. Conservative estimates claim that there are presently between 2 to 7 million Christians in Iran. Most of these are newer converts. At the rate the present revival is spreading, in just a few years, that level of growth could be truly explosive,” sources reported.

Richardson concurred. “Isn’t it better to believe for much and shoot high, than to take a pessimistic approach and aim low?” he asked.

“It is absolutely essential that the American and Western church wake up right now to this moment of opportunity to bring Jesus to the Iranian people, who are so deeply hungering for the freedom and eternal life that only he offers. In any generation, the goal of the prophetic church is to recognize what God is doing in the earth, and then get behind it. We must get fully behind ministries like Iran Alive. Jesus said that we must recognize the harvest before us. If there is anywhere in the world where the fields are white, it is Iran. But we must act before the window of opportunity closes.”

Here is an introduction to the work of Iran Alive: Part I of Richardson’s television appearance: