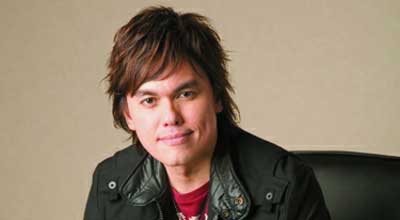 Beyond leading a church of 20,000 people, Singapore pastor Joseph Prince has gained a worldwide audience by teaching on the simplicity of God’s grace

Judging from appearances, few would have expected pastor Joseph Prince to lead a thriving TV ministry in the United States. He isn’t American, and he suffered from a stutter as a young man.

Yet his program, Destined to Reign, has spread like wildfire across television networks since 2007 when it was first broadcast in the U.S. from Prince’s church on the tiny island of Singapore.

Prince, 47, attributes his sudden popularity to neither charisma nor marketing savvy. He says it’s a testament to his signature message, which he calls “the gospel of grace.”

“There really isn’t any formula,” he says. “Everything about the television ministry has been really effortless. It is Jesus that is opening all the right doors for this ministry to grow. It is His hand at work, and I don’t take any credit for it.”

Who is this man? Where did he come from? What is his agenda? According to Prince, it’s simply to share the message of God’s unmerited favor by which he is “deeply humbled and overwhelmed.” Only two years ago, he was relatively unknown internationally, contented with life as the senior pastor of New Creation Church in a country about four-fifths the size of Fort Worth, Texas. Under his stewardship, the congregation has spiked to more than 20,000 members from roughly 2,000 in 1997, when he began preaching about what he describes as “radical grace.”

That message, he says, doesn’t attempt to balance grace with the law. He says God told him in 1997: “The moment you balance grace, you neutralize it. You cannot put grace and law together,” Prince wrote in his book Destined to Reign.

Prince teaches that the unearned and undeserved favor of God comes through the cross of Christ, and that Jesus is the reason every believer can confidently expect good things in their lives.

“Because of the cross, God is today no longer angry with us,” says Prince, who also explores the topic of grace in his most recent book, Unmerited Favor. “Because of the cross, we can today expect good, we can expect success, we can expect promotion, increase and the abundant life. It is all because of our wonderful Lord Jesus. If we have Him, we have everything and more, and can be a blessing to others.”

That message has church members lining up every Sunday, typically more than an hour before a service starts. And every month viewers of his television program write or call with stories of how their lives have been changed.

One viewer, Selena Collins from Tennessee, says that after watching the broadcasts for several months, she stopped worrying constantly and quit smoking. She also was healed of stomach ulcers. “I didn’t do anything,” she says. “Jesus took away all the pain and removed the desire for cigarettes.”
Another stateside viewer, Allcorn Lee from Florida, booked a bar on weekday nights to study Prince’s book Destined to Reign and watch video recordings of his messages with friends and business contacts.

Linda Lee Bingham of New Jersey said understanding grace has enabled her to better trust and rest in God. “Good things are popping into my life faster than I can imagine,” she says. “I started a new business project a few months ago and already have 10 employees. The work is finished on the cross, and I’m just enjoying the ride.”

Says Prince: “Hearing testimonies like these, I feel that it is all worth it—all the investment in the broadcasts, the money and the time. God is touching lives through the broadcasts.”

Only by the Cross

A decade ago, those broadcasts were barely a blip on Prince’s radar. Saved at 12 years old, Prince decided to go into full-time ministry while in his 20s. He began serving on staff at New Creation Church, preaching and assisting the pastor in ministry, and was named senior pastor in 1990. At the time the congregation had just 150 members, and Prince watched it grow to about 2,000 in the next seven years.

Everything changed in 1997, however, when he says God spoke to him while he and his wife, Wendy, were vacationing in the Swiss Alps.

“I distinctly heard the voice of the Lord on the inside,” Prince writes in Destined to Reign. “It wasn’t a witness of the Spirit. It was a voice, and I heard God say this clearly to me: ‘Son, you are not preaching grace.’”

Prince says he argued with the voice, telling God he had been preaching salvation by grace for years. When he was a teenager, he’d felt oppressed by guilt and condemnation, even worrying that he had committed the unpardonable sin by blaspheming the Holy Spirit. He tried to earn God’s approval through street evangelism and constantly confessed any sins he’d committed to keep “short accounts” with God. But he continued to feel his sins were bigger than God’s grace.

After studying the Scriptures, he began to believe that all his sins had been forgiven through Christ’s work on the cross. That’s the message he taught his church, so they could avoid feeling the way he once did.

But the voice persisted.

“He said: ‘No, every time you preach grace, you preach it with a mixture of law,’” Prince recalls. Prince says God told him that if he failed to preach radical grace “people’s lives will never be radically blessed and radically transformed.” So he changed his approach, preaching a grace message “not tempered with law,” and the church began to mushroom, growing from roughly 2,000 people to more than 15,000 by 2007.

In early 2000, while again on vacation, he says he had another life-changing encounter with God. He and Wendy were in Canada when they saw a minister on television preaching about hellfire and brimstone. It rattled Prince, and he asked God, “Why do you allow ministers like that on television?” He says the Lord replied, almost nonchalantly, “It is because ministers like you don’t want to be on television.”

The experience struck a nerve with Prince. “I struggled with it,” he says, “as I was very content being a local church pastor in Singapore and wasn’t interested in doing anything beyond that. Also, many people don’t know this, but I don’t take to travel very well, and sorely miss my family when I do.”
It took seven years before Prince stepped out of his comfort zone in 2007 to start Joseph Prince Ministries, which oversees the television broadcast of his messages. Since then, testimonies have been pouring in, and both the frequency and reach of the television program have continued to increase.

But Prince is not without his critics. He has been accused of antinomianism, or disregarding the law of God, and of preaching “cheap grace.” In reply, Prince says he is “100 percent against sin and 100 percent for holiness.”

“I have the highest regard for the law,” the pastor says. “I am for the law for the reason God gave the law, which is to bring us to the end of ourselves that we will find our righteousness, holiness, and our all in Christ alone. The law is perfect, just and good, but it has no power to make you holy, just and good. Only the blood of Jesus, which He shed willingly and gave freely, makes us holy.

“When you fall in love with Jesus, you will fall out of love with sin. The apostle Paul makes this clear for us in Romans 6:14, that ‘sin shall not have dominion over you, for you are not under law but under grace.’”

Prince says true holiness comes by a revelation of God’s grace, and points to the example of Jesus with the woman caught in adultery (see John 8:2-11). Jesus first told the woman that He did not condemn her, and then He told her to go and sin no more.

Dennis Mitch from Phoenix says he experienced this personally. In a letter to Prince’s ministry, Mitch said that after reading Destined to Reign, he found the strength to stop smoking after 30 years. Every time he lit a cigarette, he would confess that Jesus took his addiction on the cross and that he was the righteousness of God in Christ Jesus. Four weeks later, he successfully overcame the “strong pull” to buy cigarettes at a gas station, and “from that moment on the urges and the desire to smoke have been minimal.”

Prince adds that even though it costs a believer nothing, the grace of God is far from cheap. “It cost God His only Son, Jesus Christ,” he says. “God the Father paid the price with His beloved Son, who is worth much, much more than all the treasures in this world and beyond.”

Grace That Points to Christ

Along with the growth of the television broadcasts, Prince has been receiving invitations to preach at conferences and churches in the U.S., South America, Australia, the United Kingdom and South Africa.

Brian Houston, senior pastor of Hillsong Church in Sydney, says Prince has a passion and commitment to see people understand and walk in grace. “Joseph is a dynamic speaker that has invested time and wisdom into Hillsong Church in both Sydney and London,” says Houston, who has hosted Prince at his church and his annual Hillsong conference. “His teaching on grace and favor brought a fresh message to our church that greatly impacted the whole body.”

Gary Clarke, senior pastor of the fast-growing Hillsong Church London, says Prince’s message has freed people from bondage to sin. “His teachings have also impacted me personally, resonating with a truth inside me,” says Clarke, who also has been preaching about grace recently. “This has freed me to confidently express the message of God’s grace through Christ, which has resulted in numerous lives impacted.”

Prince’s messages on the grace of God have influenced worship leaders too. Grammy-winning musician Israel Houghton says the song “I Receive” from his latest album, The Power of One, was conceived after he heard Prince teach on God’s grace. Houghton wrote it with Peter Wilson, worship pastor of Hillsong Church London, and the two men still affectionately call it the “Joseph Prince song.”

Similarly, Darlene Zschech, best known for her worship anthem “Shout to the Lord” and her involvement in the music ministry of Hillsong Church in Sydney, says Prince’s teaching on grace has encouraged and strengthened her.

“I guess growing up in church where there were many rules and regulations, I often felt I could never wholly live up to the expectation of others as a Christian leader, and it weighed very heavily on me,” she says. “But Joseph’s depth of teaching about what Jesus came to do and bring and be within us has been like breathing fresh air into my spiritual lungs. If the church at large could fully grasp this timely message, I truly believe it will bring magnificent release for so many into their gifts and callings.”

Prince says the purpose of his radical grace message is to reveal the love of Christ to people. “My ministry is all about exalting the person of Jesus and pointing people to His finished work at Calvary. It is important to build a firm foundation upon the finished work of Jesus Christ and realize that in the new covenant, it is not about what we need to do but all about what Jesus has done.”